MgT-CharacterSheet (incomplete), based on this Fillable PDF.

Harlan was born and raised in an Imperial Naval Garrison on Scandia in 1064. Even though he befriended local kids during his younger years, there always remained a political tension between him and his friends and their families. Later in school and college these political gaps widened and to prevent himself from having to report his friends suspected pro- Solomani Confederation activities to the Naval Command on Scandia he enlisted with the Imperial Interstellar Scout Service as soon as he turned 18 and left Scandia for good.

In the following 28 years he lived the life of a first in scout mainly. Lots of Special Duties during the 4th Frontier War (1082-1084 during his 1st Term) and 5th Frontier War (1107-1109, during his 5th Term) boosted his Education and Experience and when his trusty old Scout/Courier was finally decommissioned ut of old age he discharged honorably on Rhylanor in the Spinward Marches with a meager pension of 14KCr per year and some cash.

For some reason – and he still swears he got tricked into the deal – he accepted an offer to crew a Safari Ship to Kegena (Amber Zone) two weeks later, where he got separated from the ship and it’s guests. Harlan ended up passed out in a hotel near a tiny Frontier Starport, where he eventually met a few other stranded Travellers who regularly gathered at the establishment to drink away the pain and sorrow that only an amber zone frontier world can cause.

The only ship that ever visited the planet during the week Harlan and his new friends spend on the beautiful but unrestful world of Kegena was a dusty, old and pretty beaten up Free Trader called Tin Lizzy, which had already sat rusting on the Tarmac of the Class E Port when he arrived with no crew in sight or business visible.

Finally he managed to get the local authorities to make an offer to acquire the ship for a ridiculously low sum of credits that practically reeked from something being utterly wrong with the ship.

The Tin Lizzie is an old beaten up Free Trader our „Year’s Endgame“ Group will have to endure. She’s not a beauty anymore, held together by duct tape, borrowed replacement parts and things found at scrap yards or elsewhere.

The Pilot is Harlan Wolfe – an aging ex-scout trying to make ends meet – with a patchwork crew of four humans hardly meeting the requirements for the vessel. 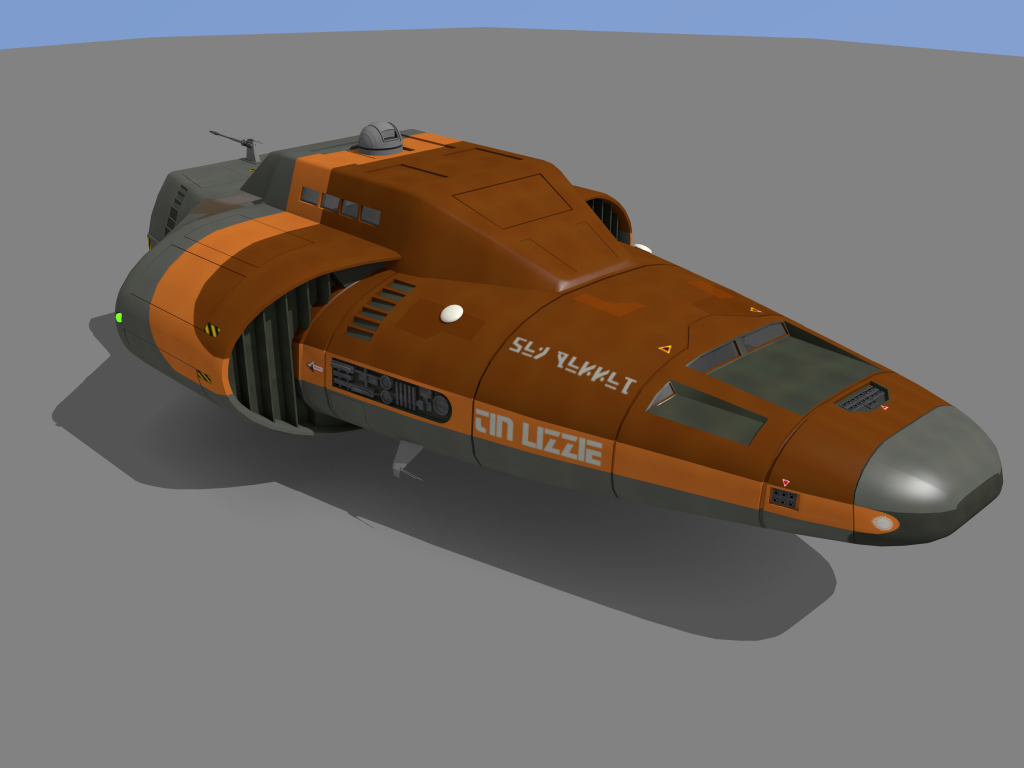 The Tin Lizzie operates on a Vala-HPJ-2A jump drive, now mounts a Billstein SMD/A maneuver drive, and a General Systems FP/A2 power plant, giving a performance of jump-1 and 1G acceleration. Fuel tankage supports a 1 parsec jump, at 20t per parsec, and one month of operations. Attached to the bridge is a VelociAct SureCalc-1 Computer Model/1 std.

There are 9 standard staterooms, an owner’s suite (used for high passengers), and 17 out of 20 available low berths. Three berth are defective.

The two VelociAct Surefire XA2 dual turrets are equipped with a sandcaster and beam laser in the ventral turret and a dual missile launcher installed in the dorsal turret, so the feed mechanism can be installed in the lower cargo bay. Both turrets can be remotely controlled from the bridge or engineering but usually require the gunner to mount the turret control chambers adjacent to the Air/Raft garage on Deck A during combat.

Cargo capacity is 82 tons of which up to two tons may be reserved as missile storage. The ship has a more or less streamlined hull (pieces of the patched hull’s paneling might fall off during reentry), with scoops and intakes for frontier refueling. Skimming a full tank requires only little over an hour while processing the skimmed fuel takes about 11 to 12 hours.

There are two Tank Bubbles of 20t capacity of auxiliary tankage each stowed in the cargo hold, which would enable the ship to perform up to three Jump-1 in a rapid succession without refuelling. Pumping the contents of one bubble into the original tankage requires an hour of work prior to the next jump. Frontier refuelling and filling the Tank Bubbles however is tedious work. First fuel needs to be skimmed into the origi al tanks. Then refining takes about 11 to 12 hours, after which the newly refined fuel can be pumped into the auxiliary tankage. Then the process needs to be repeated for each Tank Bubble and once more for the original tankage. The „Tin Lizzy“ can be fully fueled within 36 hours.

The ship has 4 crew, and can carry 6 passengers and 20 (currently 17) low passengers.

TL 9, 4 tons, Cr 90,000.
A light gravitic vehicle. An air/raft can usually cruise at 100 kph (but is extremely subject to wind effects). Top speed varies depending on size and model. An air/raft can reach orbit in several hours (number of hours equal to planetary size digit in the UPP); passengers must wear vacc suits and interplanetary travel in an air/raft is not possible. Life support must be recharged daily. An air/raft can carry up to ten persons or two tons of cargo for the larger variants. The air/raft is unpressurized and usually open-topped. Presdurized enclosed variants exist. 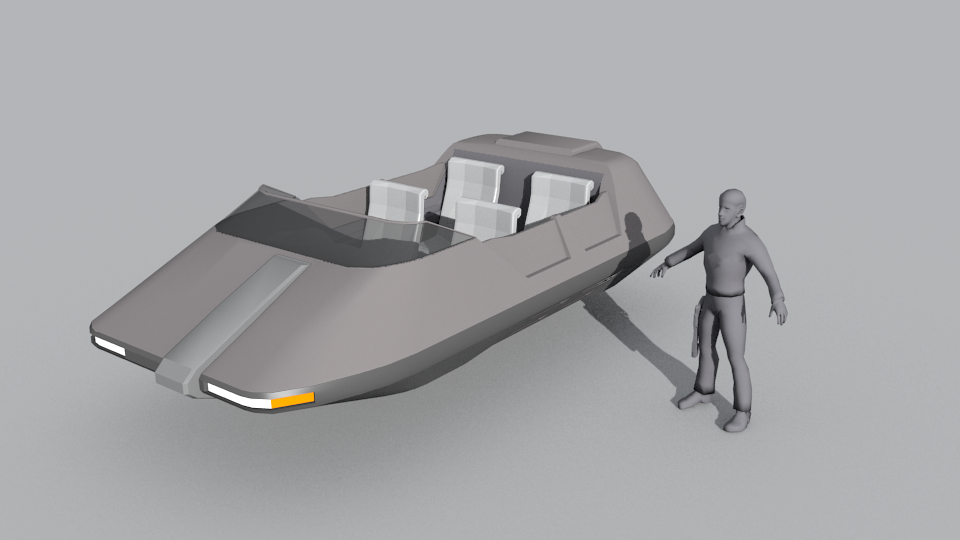 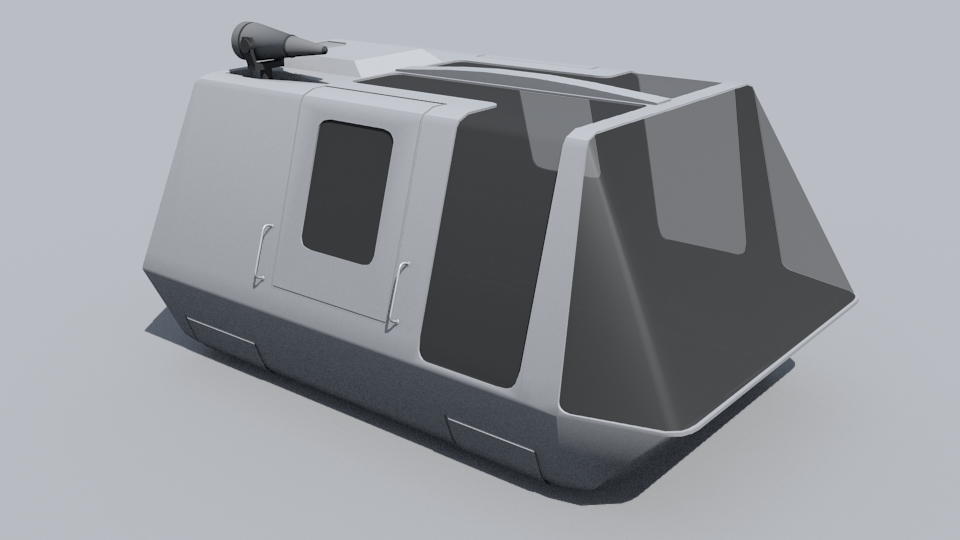