Finally the day arrived and today local customs (an about 60 km car drive away) handed over my gift from Marc Miller’s tremendous Traveller 5 Kickstarter Project. 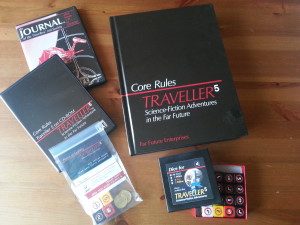 The coins feel like coins, not quite up to the heaviness of a 50 euro cent coin, but feeling consideraly more valuable than former GDR currency coins. The dice are heavy and portray a good quality look and feel.
The cards are nice, much like bonus cards from the local store. The CD-ROMs and Book are retail quality. All in all I’m happy with what I’ve got.

If you ever wondered how to pack 17 dice into a box designed for 16, this is how I packed my dice box. 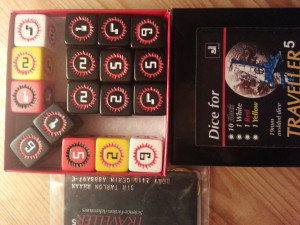 Yesterday the postman handed a large envelope from FFE over. My Traveller Deckplans have arrived. Yay! When Marc informed the KS-Backers that there is an option to upgrade to the full set, I did just that. Unfortunately I did it twice (no idea where I had my head that day).

So I wrote Marc a little note to tell him to pack in a few dice or coins or nobility cards at his discretion if he wanted to opt not to refund but to compensate by other means. So my latest packege contained: 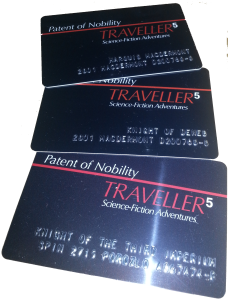 A PDF concerning Traveller Knighthood found on the web: http://www.traveller-tpp.com/PDFs/Knighthood.pdf‎ (Found on Traveller The Phoenix Project).

Other articles regarding Nobility in Traveller.

So I have spoken to a few friends old and new and I plan to host a Traveller 5 Campaign and will devellop this campaign here on this very page. Stay tuned…

Other Traveller Versions I play (or used to play)