VS Traveller or vsTraveller is a self-proposed non-commercial Mod for Vega Strike or possibly Privateer:WCU based on the same Engine. While Vega Strike above has the most complete feature settings including the possibility for subcraft, it has a few drawbacks. Devellopment is slow (with about a Million „o“) and there are bugs that bug me.

On a perfectly vanilla Windows Vista PC 4GB RAM, low spec on-board grapics, USB-Gamepad, USB-Keyboard and USB-Mouse, a Headset and VoiceAttack Software running in the back, the game becomes unplayable when approaching the first planet (Atlantis) due to polycount I guess.

Turning down the graphics setting to quite low, results in a playable state, but the bugging starts when approaching the Planet (press N to select Planet as Target), approach planet, press ALT+0 (Alt+Zero) to request docking clearance, wait until Docking clear appears in the HUD and Press D to dock. Nothing happenes when pressing D. VoiceAttack results in the same. The SW recognises the command (Open menu) for example is set to press ESC and it works from ingame. But well… I used to spend so much time modding VS that I hope it can be sorted out one of these days.

Whats an absolute plus for VS is it’s multiplayer capabilities.

Meanwhile… we also take a closer look at other engines…

Under the working name Traveller Pioneer the game could also be a non-commercial Mod for Pioneer Space Sim It is an alternative to VS Traveller above with the exact identical gameplay in mind.We are going to test both engines on an older surplus Office PC with lower VGA-Specs to evaluate performance differences of the engine.

Pioneer seems to have a very active Community, it’s also customizable, features an Open Source Game Engine and is a sandbox single player game. It offers top notch graphic add-ons and loads of scripts that expand gameplay. Furthermore it has working planet to space transition and on planet locations implemented.

It does not have Subcraft if I recall correctly, but I could live with that for a while. Pioneer is based on pure Newtonian Physiscs. while very challenging and fun you are required to actually learn flying the ships, especially landing them. Belive me, going from a Multi-Mach re-entry speed to zero (drift, yaw, pitch, roll wise), on a tiny landing pad is not easy. On the other hand you can dive deep down onto planets. Great fun.

Next could be Oolite, an open world space opera. Multi platform, highly customizeable, low impact on hardware resources. However it generates its universe only procedurally. That wouldn’t work with vsTraveller.

The goal is to use Models created for Traveller Illustrated and a Traveller Starmap / Game Universe. This will include probably only the Foreven Sector, ideally one of the more explored sectors like the Spinward Marches or the Reavers Deep Sector. That also depends on what Mark Miller’s position to this would be (I haven’t asked yet because I’m only in the planning stages).

I’m afraid this will remain a closed project for licensing reasons. I will have to inquire and get permission first to deploy such a data set using all the copyrighted material from the game. And to be honest at this time VS Traveller is just a name and a thought experiment. I will show ingame screenshots and footage if that becomes feasible. But do not expect to see anythin happen very soon on this page.

In the meantime I discovered that my beloved Privateer Parallel Universe (PPU) has disappeared from the Internet. It was so cleanly develloped and features were so established that I planned to use it as a base for my other mod „Nations of Orion“. But thanks to one loney dev the sources were saved and brought up to the most recent Vega Strike dev state. The new name is Privateer WCU and basically everything I wanted for my games. Thanks ermo for your work on it.

So I set up a debian based – Linux Mint Debian Edition (LMDE) to be exact – development system just for it. After sorting out a few dependencies VS compiled fine and I plan the make the required changes to run Priv:WCU shortly. Already I changed the VS Splash screen of my Windows machine to a few Traveller images I converted for this purpose. A nice touch, but nothing to show off yet.

So I will let you know whichvway I will be heading. A  current Privateer Wing Commander Universe (WCU) as a dev base would be nice.

Implementing RPG elements into VS

Working with the units.csv file of Vega Strike

First the technical limitations need to be addressed. VS is a single player first person space sim by trade. It learned multiplayer on it’s way, even mmo. But the roots are basically single player trade and fight. vsTraveller will be a first person space sim too. It will probably stay a single player game, as Traveller jumps take to long for in game coverage. Thus each jump advances the clock by about 168 hours (+/- what the rules say). No real time mmo is possible this way, but a community would still be. Players could pass conteacts and missions and exchange news, messages, goods and equipment through starport services. Every time a ship arrives in system any updates relevant for that ship and timeframe will be downloaded and made available. It’s virtual play by mail inside a pc game. Group play might be possible in supporting roles with temporary assets. On player sets the mission and other can join representing ships in system at that time. Not their own ships, but such that would have normally been controlled by the AI.

RPG implementation will probably be a simple Classic Traveller Character Profile plus description, comparable to the regenerated characters shipped with classic Adventure Modules or Double Adventures. Example scanned from the Classic Traveller Module Beltstrike as per Fair Use Policy: 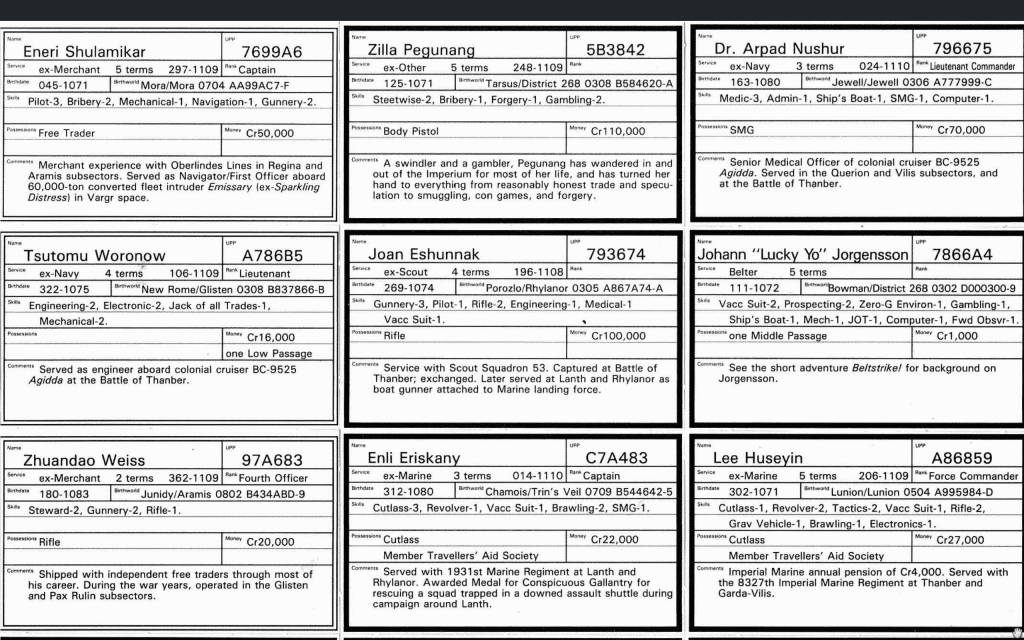 As visible in that scan Characters are composed of a name, UPP, career info, birthdate, homeworld, main skills, main possessions, cash and a short description. Thats possibly as far as it gets. Maybe we use MegaTraveller character generation rules as per this web-script. Or maybe we use T5 Quick Character generation as proposed by Robert Eaglestone:

The crew are virtual characters not directly controlled but influenced by the player, they form a modifying skill set that can influence ship capabilities, at times where the character or autopilot is in control of the ship. The crew is available as a special type of unique ship upgrade. Pilot and Engineer Crew upgrades boost performance, Navigator and Sensor Crew upgrades affekt traveltime, efficiency and combat visibility, Medical, Steward and Broker Crew Upgrades affect economic factors, etc.

Crew can be generic (random names) and unique (reoccurring npc names) and can change ship by selling and being bought. Maybe there will be a chance to change „buy and sell“ into something like „hire and fire“ in this context.

A character is one major person controlled by a player as his in game representation. It is basically a oackage of information carried aboard the ship. It will be represented by a special type of unique cargo. Character can change ships through trade or missions.

Well I’ll keep you updated for the latest in devellopment.

This is a Traveller Illustrated sub-project.

Traveller is a registered trademark of Far Future Enterprises. Far Future permits web sites and fanzines for this game, provided it contains this notice, that Far Future is notified, and subject to a withdrawal of permission on 90 days notice. The contents of this site are for personal, non-commercial use only.

Any use of Far Future Enterprises’s copyrighted material or trademarks anywhere on this web site and its files should not be viewed as a challenge to those copyrights or trademarks. In addition, any program/articles/file on this site cannot be republished or distributed without the consent of the author who contributed it.