Workshop – Coffee at the Port

After committing to donate another image to the official Traveller Calendar 2014 and possibly a proposed official 2300AD Calendar 2014, I’ve started working on the concept of the new image. 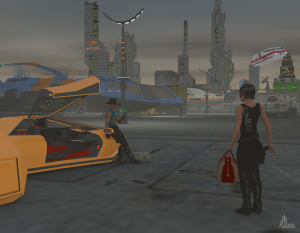 Key elements are the presentation of typical Traveller ships or vehicles landed on a remote starport – possibly a Class C, perhaps a Class B. I always wanted to do a piece with the Armored Merchant, the Free Trader and perhaps the Patrol Cruiser or the Fat Trader. The latter is currently in the works, so maybe that’s a maybe.

Here are the pieces I use for Inspiration. William H. Keith drew a scene with the Armored Merchant for the RPG Mag “High Passage” No. 3 (1982). A scan of that drawing is also shown in my article about the ship, which forms the basic scene, as you may see when comparing it with the sketch above… 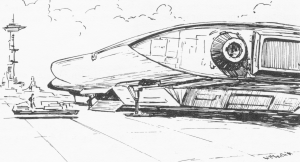 This will be appended to the left to leave more room for more action. The Free Trader will probably go to the left as shown in my first concept sketch above. The ship in the far center of the screen is not decided upon yet. It might be the Scout Courier shown, but that would essentially mean I have to model that ship, or it might be the Patrol Cruiser or Subsidized Merchant. Perhaps I will even use the Challenge Class Subsidized Merchant I made for TheTravellerGroup Challenge on deviantART.

Further inspiration comes from various Favourites I collected on deviantART, as for example (and not in any particular order):
A spaceship and some coffee by ~DrawingNightmare
Mars Spaceport by *JonHrubesch
Rig by *WhoAmI01
A Long Journey by ~JadrienC
Boomz Bike by ~claren89
OTJ 05 by ~Apostolon-IAM
Castaway by *steve-burg
Hello? Is there anyone here? by *BenWootten

There are likely more that I will add later, as the project progresses.

So whats needed? First of all I’ll need terrain with environment (includes Sky, Lighting and the like. This will probably be done in Terragen or in  Blender) so the scene has the right frame. I’ll probably do my own with the exception of the clouds. Terraspace is the correct term for this kind of image, which only forms the stage for the scene here.

Obviously I need the ship and vehicle models. I already have the Traveller ships and need to model a decent looking motor bike or car. I already dropped the idea of placing a gull-wing door car into the scene but a ute or something along that line would do too.

And there will be a few Characters in there, that need representation. Especially two are fairly detailed. Susan Bonner in the front an Tarlon Rhaan leaning on the motorbike/ute (with a mug of coffee) on the left side. I hope to use my old Mr. Default for the rest of the image, as he is low on poly-count and far in the distance or shadows.

Containers, crates, luggage and cargo handling equipment are needed to be moved around, about and aboard and the passengers and crew scattered about the landing field to depict a busy port are needed too.

The Free Trader in the image above will be the Brawlin Beast. See a glimpse of her here… 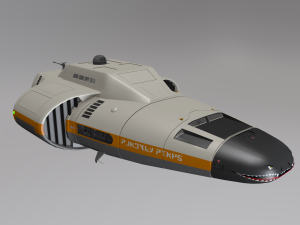 And there is an ambulance livery in the works for the Lopec G-Carrier. 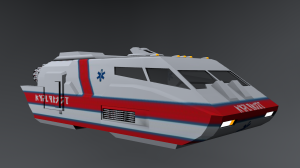 Tiny update: Less than one month to the deadline.

I fiddled around with the scene a bit and fixed other questions. My hardware will pretty much limit the complexity of the scene. I first decided to make it a daylight scene as the lighting is much simpler. But RL time constraints I won’t leave me with too much time for good texturing. So I will likely make it a foggy scene or hazy scene in early evening light or in the morning light.
However I’ll have to see how that turns out.

So… The vehicle… I do have an old model of a flying gull wing door car that could be great for the scene. Which basically means that I have all the vehicle’s models ready at hand. They will need paint, though.Maybe a simple Air/Raft is sufficient. I have yet to decide..